I arrived in Portugal for Christmas last year to spend a few days with my family. A photo expedition in Lisbon, where we were staying, was in my plan, of course, but not the focus on this particular trip.

I had been there about a decade ago, also on a brief visit. My recollection from my first impression of the city back then was that I would return, someday. Even if it was just for the amazing food. And for Pastel de Belém (I travel for food). After all, it’s the country of my ancestors. I speak the language. There’s a connection. It’s familiar, feels like home. Although I am a firm believer and practitioner of the philosophy that you should not stay in your comfort zone for too long.

It is hard to capture still pictures when you have to move along because time is short. But I was able to photograph some highlights from my trip, where I walked, where I sampled some of the history and delicacies from this beautiful country where my father’s family came from. I took it all in. I looked it all around, I embraced it, felt it, smelled it, tasted it.

Lisbon is an Old City from the Old World.  As such, history is everywhere you look: buildings, monuments, pavement, infrastructure. But underneath wear and tear, I found vibrancy, longevity and a refreshing sense of humor. A city that inspires, brings romance back to the most jaded soul.

The most important avenue in central Lisbon, where old and modern buildings clash elegantly. And where you step on its calçadas (a mosaic of Portuguese stones).On the side streets, you find very narrow steep walkways and the quaint and national monument “Ascensores” a tram transport that takes you to the neighborhoods that sit on higher ground on the hills. Think of San Francisco. 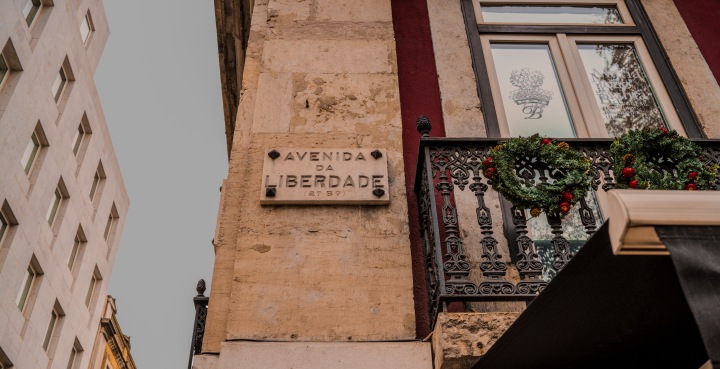 Cinema São Jorge. A reference in culture in the capital. Movies, music.

Balconies and the famous azulejos – tiles – on the façade of buildings. Ascensor da Glória. A touch of 2015 self-expression on the 19th-century tram car.

And then, I found the building I was looking for! Click here to see the photo I took of it when I visited Lisbon for the first time.

A cuisine that is heavily influenced by the Mediterranean seafood and spices, Portuguese food is as diverse as it is regional. In the capital, of course, there are many restaurants that specialize in the neighboring countries cuisine (mostly Spain, France and Italy). But look for the traditional cozidos (vegetable or meat stews), bacalhau (cod, that is often salted) and their countless egg-based desserts. Portugal produces, among other things, olive oil, wine, cheeses, that sadly do not get the recognition they deserve this side of the Atlantic.

Ginjinha Sem Rival Eduardino. And here’s to the Portuguese cherry liqueur that is a tradition for over 150 years! Locals and tourists flock to these tiny storefronts that sell old family recipes for this sweet and potent concoction. I was there mid-afternoon and it was packed. Blame it on the winter weather… Ask for the cherry – they serve shots with or without it – but be forewarned: the tiny fruit holds a lot of the aguardente potency!

One cannot visit Lisbon without trying Pastéis de Belém. Only two people (apparently one has already passed away) know the original recipe that dates back from two centuries ago. It is a well-guarded secret (the recipe is not written anywhere, it had to be memorized).

I have to tell you, the monks in the monastery where this pastry was invented, had really a good palate. It is a flaky crust that is not anything like a Napoleon and it has a warm and custardy center that is not overly sweet. I am serious, it is worth the plane ticket to just wait in line and try some (yes, before the Cronut craze, people from all over the world were lining up this storefront).

Hungry Eyes through a thick glass

You can eat the pastéis inside or take out.  Visitors can also see partially the assemblage of the Most Famous Pastry in Portugal. 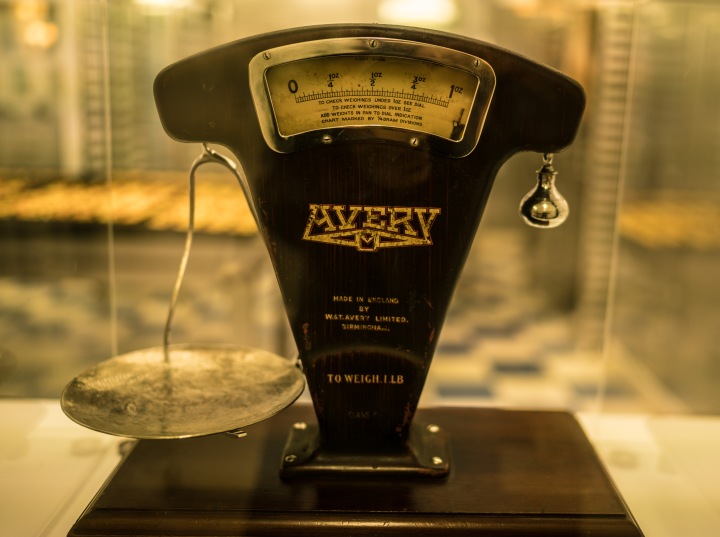 History inside the bakery. Most likely this is how the ingredients that go into making the famous Pastéis de Belém are measured.

After making the pastry and baking the pastéis away from the prying eyes of the tourists that visit the bakery, they are brought to the viewing area then proudly displayed and ready to be sold.

It was Christmas, after all. Leaving Pastéis de Belém shop and catching the elétrico to do more sightseeing while headed to see the sunset at Praça do Comércio (Commerce Square).

From a pale gray day to a golden-hued sunset, Lisbon is like that: always surprising you. Above is the Arco da Rua Augusta, at the Praça do Comércio. Near the Rio Tejo (Tagus River), it’s one of the biggest plazas in Europe and where the many kings of Portugal resided for centuries. Now it’s a very popular shopping and entertainment destination (Rua Augusta is a strip mall with adjacent streets filled with restaurants, cafes, local shops and chain stores). It also houses the most important government offices in the country and a place where you find Lisboetas and many tourists watching the end of the day. 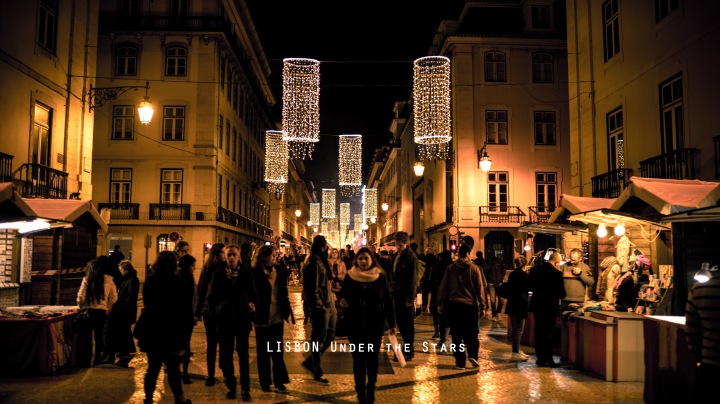 Rua Augusta (Augusta street) under the stars and Christmas decorations.

Amber-hued street lights bring a different mood to Lisbon streets. It fills with nostalgia, a longing for something. Like a love poem. From Portugal’s most famous poet and tortured soul:

I wandered in Lisbon. I found love.
–FC

Writing On The Wall

A story behind a photo – Lisbon photo essay