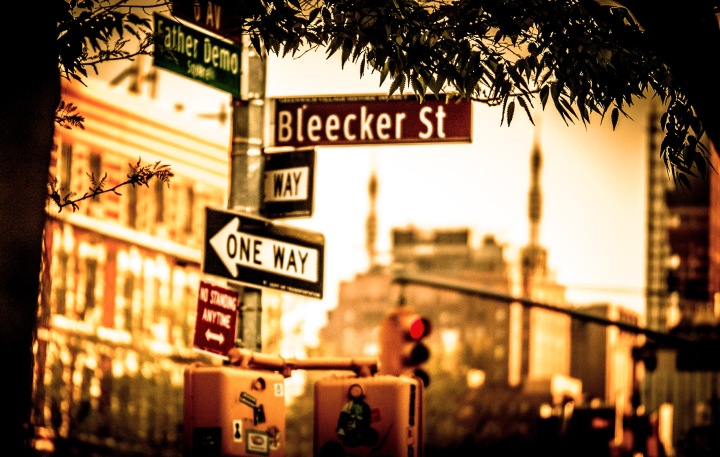 Forty years later and it is not Paul Mazursky‘s ‘hood anymore (Next Stop, Greenwich Village). Or when Bob Dylan was freewheelin’ on Jones Street. The community of laborers, misfits, poets, eccentrics…Life was not easy but there was plenty of avant-gardeness to go around with some cheap beer and a nice hot meal at a diner nearby for a few tokens. The place where the “hippies” (not “hipsters”) ruled and roamed the cobblestones streets questioning their own existence and the establishment by copiously reading nineteenth-century philosophers. Roughing up a bit. Protesting. Getting into (and making) trouble. Influencing a generation to be liberated from the norm and social customs, while the music played on. Very inspiring music.

Well, Greenwich Village of 2016 hasn’t completely lost the vanguard luster but it has been scrubbed down to a pale (the weary may say dull) gold. There are still a few misfits, troublemakers and eccentrics from the old guard trudging on (and some novice in-training). There has been some civic engagement and political protests back on the streets in recent years – Washington Square Park being the usual gathering place for that. And there are still a few poets of the written and spoken word, who read and sing their hearts out for a beer while feeding the souls of the passersby.

But the establishment has overpowered. More people on the streets shuffling, from point A to B. Less wandering. Tourists – some with very demanding palates, consumption habits and uninterested in learning (and not helping to preserve) the neighborhood’s history. Electronic devices frenzy instead of some quiet Nietzsche time and a notepad. More selfies and less eye to eye, deep conversation on a corner cafe. The disappearing act of mom-and-pops. “Relics” such as bookstores and record stores on the verge of extinction. Old cultural institutions becoming victims of predatory leases by landlords, like Caffe Vivaldi (click here to sign a petition to save this beloved cafe – home of many artists – from closing). And of course, cost of living…although cheaper drinks and a bite can be found at some happy-hour places, the rent increases at an alarming rate have made living in the neighborhood out of reach for many and forcing long-timers and artists to move somewhere else.

The times they are a’ changin’.

But I’d like to think not all is lost, yet. I still have hope some things will remain the same in Greenwich Village for more generations to come. Despite gentrification, and if you have an indiscriminate eye, spending a few hours in the neighborhood at any given time of the day, you still get a glimpse of that bohemian existence. Nostalgia can be soothing from the hustle and bustle. And perhaps, you’ll feel that time went back and stood still for a few moments. Just look down on the cobblestone streets that have resisted urbanization. The brownstones, colorful buildings and the people who inhabited them. That little Italian restaurant. The bars and clubs in the MacDougal and Bleecker Streets area that gives local artists a chance to shine. And one of my favorite pit stops in New York City (when I lived there and when I return for a visit), Washington Square, where that hope might be walking around on their way to school, work, gig. Sit in one of the park benches just to chill, to watch people go by, to socialize with some of the locals who may challenge you to a game of chess (warning: you may lose big time). Or to just reminisce about life while watching some musicians play some oldies. Speaking of which, a big shout-out and thanks to Graeme Norris (sax), Nathan Brown (bass) and Uri Zelig (drums) for the midday jazz and inspiration to write these words and take some pictures. 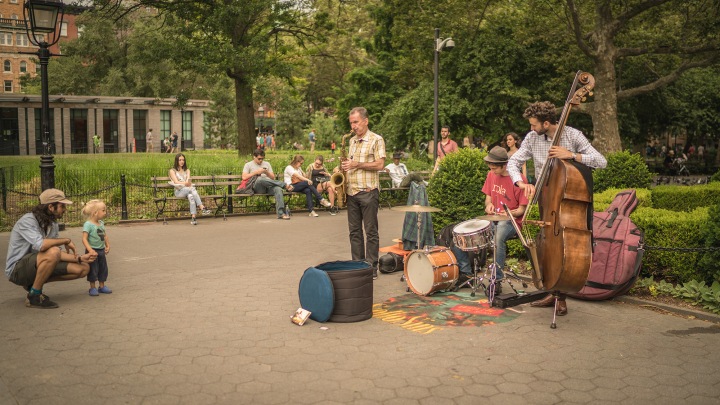 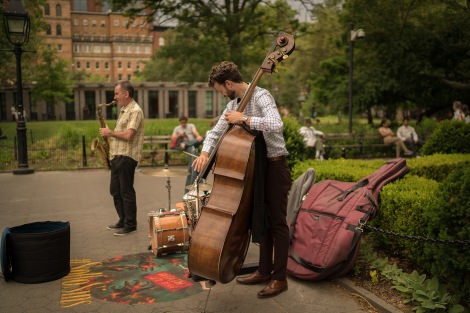 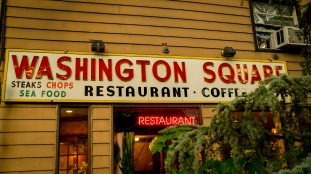 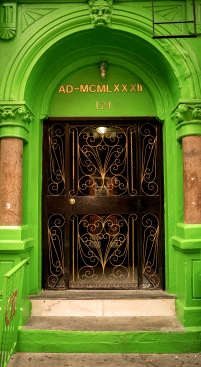 All photos by Flavia Caldas.  © All rights reserved.

Writing On The Wall

A story behind a photo – Lisbon photo essay